Ligon Media turned fifteen on June 01, 2016. We have lots of folks to thank, especially our terrific clients. We started off as creative d ADVERTISING, but then a started doing a lot of work in public relations so decided to change our name to David Ligon Advertising & Public Relations and then noticed we had a fair amount of video, website and photography work, so changed our name to Ligon Media. Which it remains.

Since we started primarily as an advertising agency, I wanted to share a little advertising insight about a few of our favorite projects. 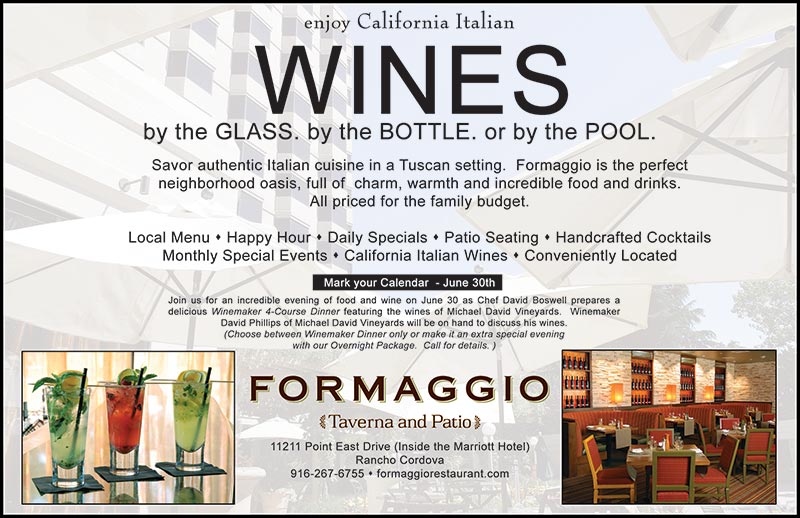 Ad for Formaggio Ristorante to promote wines and poolside dining.

When Ettore’s Restuarant and European Bakery was a client, its general manager called to tell me they’d need a marketing piece on the newly acquired chocolate fountain soon. (At the time, chocolate fountains were brand new). He didn’t know when, just wanted to give me a heads up. So for two weeks I thought about chocolate fountains while I puttered around. And I had some great concepts. My favorite was around the idea that gluttony was good. So when the GM called and told me he needed something for an event they were doing at the Crocker Art Museum in a few days (I had to have it done the next day for printing), I said no problem. I already had the idea. So I sat at my computer, all set to create my gluttony ad and then I typed the following words: “It’s not a party until someone goes chocolate dipping!” I have no idea where that came from. But as soon as I wrote those words, I knew it was the ad. So you may think I wrote the ad in 30 seconds, and in a sense that’s true. But had I not been thinking about it for two weeks, those 30 seconds may not have happened.

“I have no idea where that came from. But as soon as I wrote those words, I knew it was the ad.”

Another client, Formaggio, whose restaurant was in the Sacramento Marriott Hotel next to the pool, wanted to promote both its California Italian wines and the fact you could sit outside. This is one of those ads that just writes itself. They wanted to sell both individual glasses and whole bottles. So I came up with: “Enjoy California Italian wines by the GLASS. By the BOTTLE. Or by the POOL.”

One of my favorite ads, was a PSA for California Plan Your Giving, which was trying to get people to pledge to donate money to any charity upon their death. We created a series of PSAs, but my favorite was based on “My dad can beat up your dad.” Except for the twist was “My dad can pledge more than your dad” where we had a series of grown men comparing their dad’s prowess when it came to charitable pledging.