DIARY OF AN ADMAN

Since today is election day and in honor of my new series “Take A Look Back Tuesday,” here was a fun little election announcement project from the past.

In November 2003, I had one of those “Ready. Set. Go” moments.  Popular radio talk show host Tom Sullivan was going to announce live on his radio show whether he would run for the 2004 Republican nomination for Congress or continue with his radio program (this is before he took his show national).  I came up with a fun idea for my bakery client to bake him a cake that covered either decision (just turn the cake around and it would support his choice).  Unfortunately, I thought up the idea two nights before Sullivan’s big announcement.

The next morning (one day before Sullivan’s announcement), I was with Ettore Ravazzolo, owner of Ettore’s Restaurant and European Bakery (my client at the time), for a noon TV gig. I told him about this fun idea and too bad I hadn’t come up with it sooner, because we could have done it. Or so I thought. Later that afternoon, Ettore’s general manager called to tell me Ettore wanted to do the cake, but they would need the artwork by 6:00 p.m. (the call came a few hours before that).  At the time, this was only an idea, there was no artwork to give them. I hadn’t even fully formulated what I would write or create.

So with only a couple of hours to write out the concept, create the artwork, get it approved and get the printout over to the bakery, I sat down at my computer and opened Photoshop. It ended up being a really fun public relations project. And without a doubt, one of the toughest deadlines. I’m a big believer that the little details matter as much as the big ones. The concept for the cake was “Tom’s Decision 2003,” but there are also a lot of little nuggets like the political side showed the cake was “Paid for by Pastry Chefs for Sullivan.” And no matter what decision he made, Tom made the “right choice.”  Here’s the graphic that went on the cake. 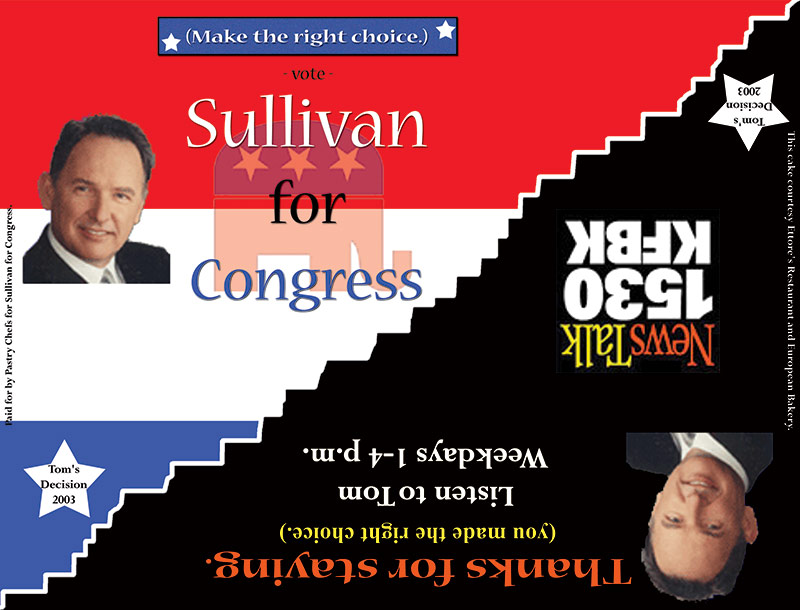 Creative cake made for Tom Sullivan at KFBK.

“So with only a couple of hours to write out the concept, create the artwork, get it approved and get the printout over to the bakery, I sat down at my computer and opened Photoshop.”

I delivered the cake to the radio station the morning of his decision and unfortunately I had a meeting that day so I never heard his show. But the person I met with said her boyfriend heard him talk about it. And Sullivan sent Ettore a nice note to thank him for the “clever” cake.

Oh, by the way, Sullivan’s decision was to remain at KFBK and forgo running for Congress. So this is how he would’ve read the cake. 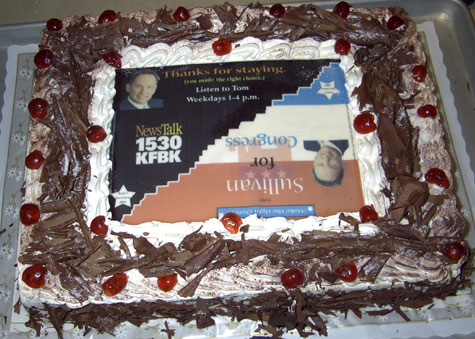