Be Prepared, Be Very Prepared

With earthquakes shaking numerous countries around the world; with hurricanes and the devastation that follows hitting our southern shores; with angry little tyrants launching rockets over our allies; and with a seemingly endless supply of scary news from all reaches of civilization, the launch of Prepper’s Compound was timely. When they reached out to Ligon Media to help launch their new company and e-commerce website, we looked at the destruction around the world and decided to create a poop joke. Because let’s face it, poop jokes are always funny. And the rest of what’s happening … isn’t. 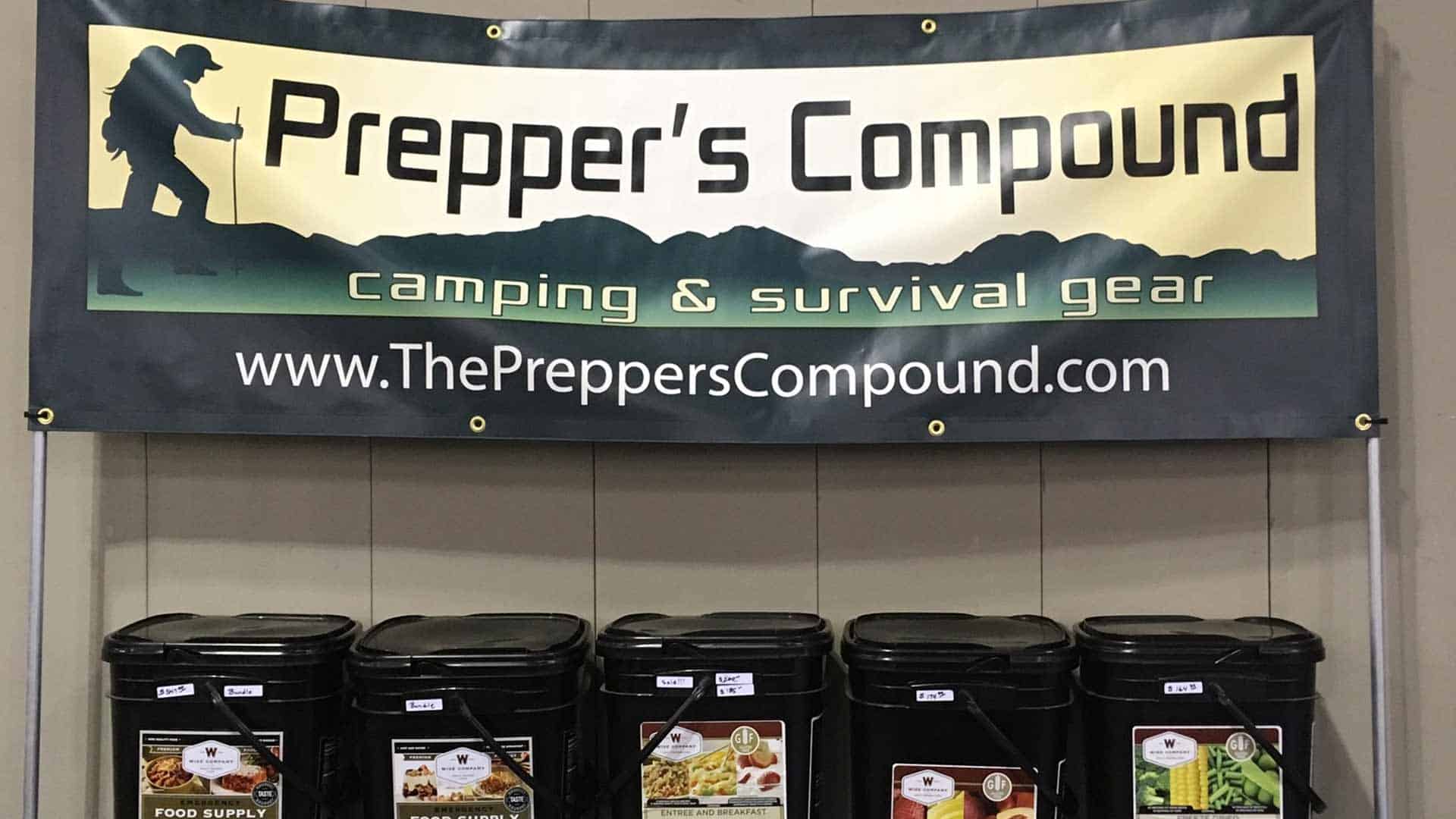 With the many disasters happening all over the world, it seems like a good time to launch Prepper’s Compound’s new e-commerce website. Not just for survivalist gear, but also because they have great stuff for hiking and camping. Seems like the perfect time to get away from it all for a few days.

Prepper’s Compound is a new e-commerce internet company located in Winters, California. Just a hop, skip and jump away from Sacramento (San Francisco too, if you jump the other direction). They sell products for the hiker, camper and survivalist. Ligon Media was tasked with building the company’s new website, but also lent a hand with logo development, business card design and signage creation.

What really drew me to this company was the people running it — Christa and Jason Haefner. I’ve known Christa for a few years. In fact, she nearly got me killed when she took me on a hike when a vicious rattlesnake, with deadly venom dripping from its fangs, almost leaped out from its hiding place and filled my precious veins with its poison. Okay, I might be being a little hyperbolic … “might” be. But it’s reasons like this that Christa and Jason know their stuff. I would have walked by the deadly creature, while eagle-eyed Christa spotted it. You see, they are hikers and campers. They are familiar with the woods. They try the products they sell. In fact, they use the products they sell.

So here’s where the poop comes in. One of the products the company features is a fully assembled dog pack. It’s a backpack designed for dogs so they can carry their own gear (and what’s great is Prepper’s Compound packs it full of what dog needs for a hike). It’s estimated that adult dogs can carry up to about 30 percent of their weight. So you might as well make Fido carry his own dog dish. Christa had a photo of her dog Rogue wearing one of the dog packs and wanted to get a tabletop sign with the company logo on it for a tradeshow they were attending. I thought I could do better than that, so I asked her if I could create a sign for her. She agreed.

Use Your Experiences to Create Your Messaging

I live in midtown Sacramento, where I go for a lot of walks. So everyday I see people walking their dogs with dog and leash in one hand, while the other hand is always seemingly carrying a little bag filled with Fido’s love … or something like that. Thinking about that, inspiration struck. 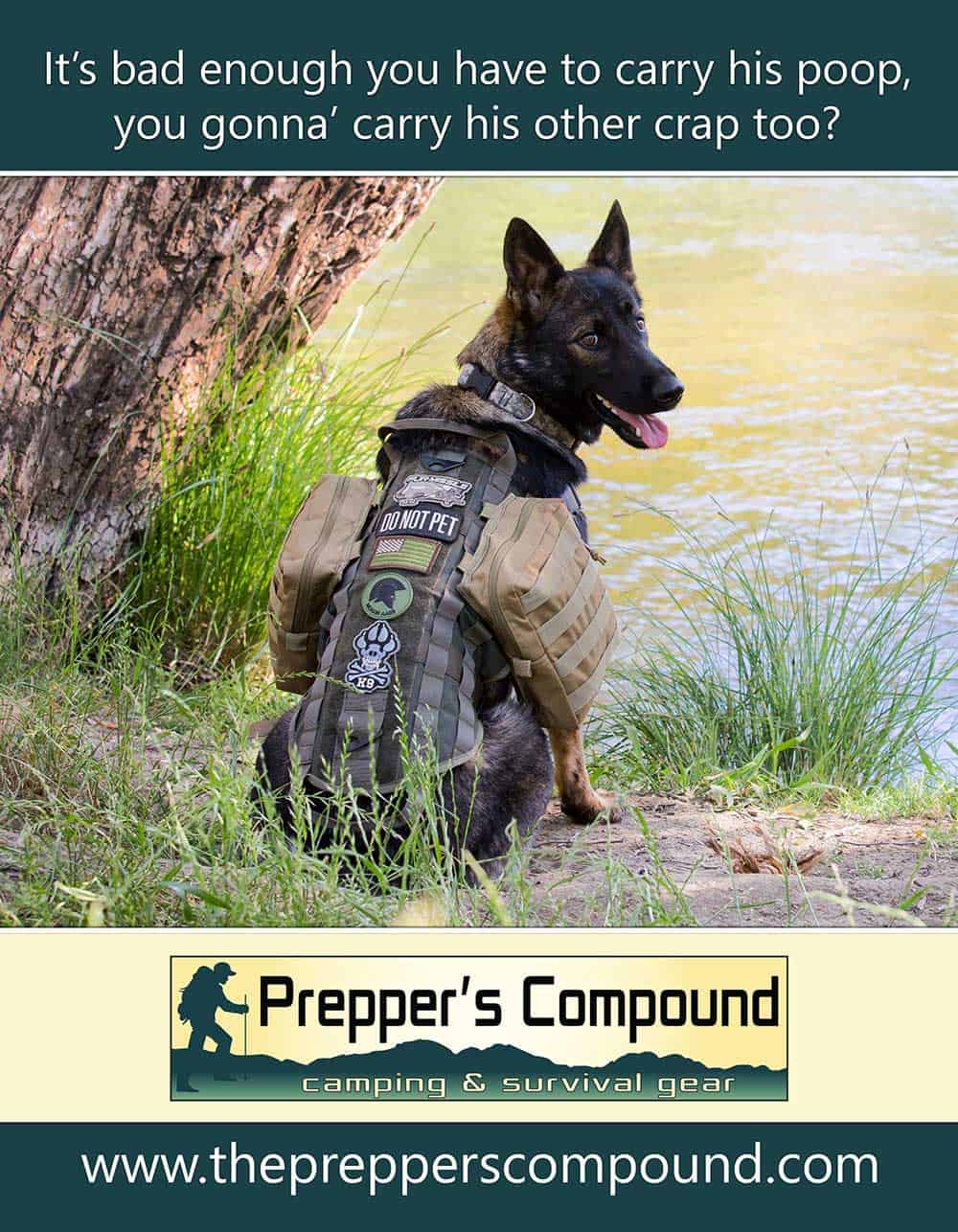 Get your gear at Prepper’s Compound. Photo by Leah Dawn Photography.

“It’s estimated that adult dogs can carry up to about 30 percent of their weight. So you might as well make Fido carry his own dog dish.”

Why I Enjoy Doing Advertising and PR

One of the great things about having an advertising and public relations company is the opportunity to work in new areas everyday. Not just outside where I live, but also outside my comfort zone. I am definitely not a survivalist. I’m not the guy you are going to come running to when the zombies take over (unless you’re looking for food for them, then I may be good for that). I’m not the first one to suggest we go hiking and I’m definitely the last one to suggest we go camping. But working with Prepper’s Compound e-commerce site gives me an opportunity to be exposed to that. The same way that working with some of Sacramento’s best restaurants exposes me to dishes I would never otherwise try. The same way that working with many charities and nonprofits teaches me about issues and concerns our society is faced with and how to solve them that I would otherwise never think about. The same way that working with a window manufacturing company taught me what a window sash was, and how working with attorneys teaches me they don’t give out free legal advice (joking … sort of).

And also, if you ever visit the owners of Prepper’s Compound at their ranch, if you’re really nice they’ll let you pet a baby horse (assuming their other horses have been frisky recently). I grew up in the country and yet I’ve only had two opportunities to pet a baby horse, and they were both as part of my job working in marketing.